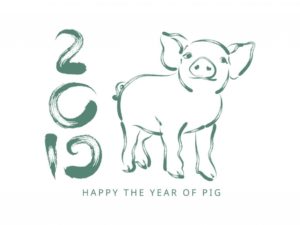 The actual Tibetan New Year date of February 5 marks the beginning of the auspicious year of the Female Earth Pig, 2146 / 2019.

“Losar is the Tibetan New Year and the first two weeks, in particular, commemorate the time when the Buddha uncharacteristically displayed his power by doing a number of miracles to win over hundreds (if not thousands) of disciples from a teacher who was a non-believer of what the Buddha taught and challenged him to a dual of mystical powers. At the end of the two week period, the Buddha had clearly won the match and as a result all present converted to the practices taught by the Buddha.

The new year spawns a time of increase in virtuous activity amongst Buddhist practitioners. Any actions done during that period of time, for better or worse, are multiplied in their power by virtue of being in alignment or out of alignment with the great deeds the Buddha himself did during this same astrological period over 2,500 years ago. It is a very powerful time to practice and increase one’s commitment to both practice and study as the power of that magical event can be harnessed to assist in our personal evolution towards enlightenment.” (courtesy of FPMT)