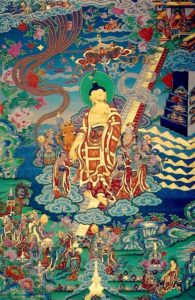 One of the four great holy days in the Tibetan calendar, Lhabab Duchen marks the anniversary of Shakyamuni Buddha’s return to Earth after spending three months in the God Realm of Thirty-Three, a higher realm where his mother was reborn after she died shortly after giving him birth. The Buddha traveled to this realm in order to repay her kindness by giving teachings to liberate her from samsara. His teachings in the God Realm of the Thirty-Three also benefited the Arya Beings who lived there.