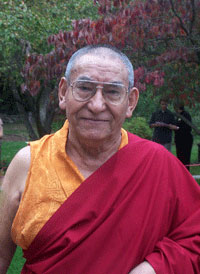 The Mahayana Sutra and Tantra Center was founded under the guidance of our revered spiritual teacher, Sermey Khensur Rinpoche Lobsang Tharchin. Khensur Rinpoche first came to the United States in April 1972; he continued to live and teach here for more than 30 years. He was one of the most senior Tibetan Buddhist masters to bring the holy teachings of Tibetan Buddhism to the west.

Sermey Khensur Rinpoche Lobsang Tharchin was born in Lhasa, Tibet in 1921. He entered the Mey College of Sera Monastery at an early age and proceeded through the rigorous 25 year program of Buddhist monastic and philosophical studies. Upon successful completion of the public examination by the best scholars of the day, Rinpoche was awarded the highest degree of Hlarampa Geshe with honors. In 1954, he entered the Gyumed Tantric College, completed its course of study under strict monastic discipline, and shortly afterwards attained a high-ranking administrative position.In 1959, Rinpoche escaped to India along with His Holiness, the 14th Dalai Lama, Tenzin Gyatso, and tens of thousands of other Tibetans. Actively involved in Tibetan resettlement, he compiled a series of textbooks for a Tibetan curriculum to be used in refugee schools and also taught in Darjeeling, Simla, and Mussoorie.

In 1972, Khen Rinpoche was chosen by H.H. the Dalai Lama to come to the United States to participate in a project involving the translation of Buddhist scriptures. Upon its completion, he was invited to serve as the Abbot of Rashi Gempil Ling Temple in New Jersey, a position that he held until his passing, on December 1, 2004. In 1975 Rinpoche founded the Mahayana Sutra and Tantra Center in Washington D.C., with a branch in New Jersey, as well as, the Mahayana Sutra and Tantra Press. Over the years he has offered a vast range of Buddhist teachings.

In 1991, Khen Rinpoche was asked by His Holiness the Dalai Lama to serve as Abbot of Sera Mey monastery in south India. After a brief appointment there, he returned to the United States, where he continued to teach and direct a number of projects dedicated to the restoration of Sera Mey Monastery in India and to the flourishing of the Mahayana Buddhist Dharma in the West unitl his passing in December of 2004. 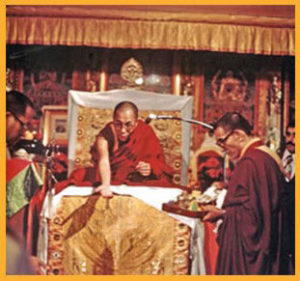 The new incarnation of MSTC’s Founder and Beloved Teacher

The new incarnation of MSTC’s Founder and Beloved Teacher, Sermey Khensur Rinpoche Lobsang Tharchin was recently recognized by His Holiness the Dalai Lama:

“It is with the greatest joy that the Mahayana Sutra and Tantra Centers of New Jersey and Washington, D.C. announce the wonderful news that the reincarnation of our holy Lama, Sera Mey Khensur Lobsang Tharchin Rinpoche, has been identified as the two-year-old boy Tenzin Namdrol, who was born on January 12, 2008 to a Tibetan family living in India. We also wish to express our deepest gratitude and appreciation to His Holiness the Dalai Lama, who graciously consented to guide our efforts to locate his reincarnation and personally made the final determination. With the approval of the young boy’s parents, a Sixteen Arhats Puja was held on July 4 of this year at the family home in Mundgod, India to formalize his recognition and offer prayers for his well-being. On September 1, His Holiness the Dalai Lama presided over the hair-cutting ceremony in His private apartment at the main temple of Sera Mey College in Bylakuppe, India, and chose as his spiritual name Tenzin Jikme Namdrol. ” (Written announcement courtesy of Art Engle from MSTC, New Jersey) 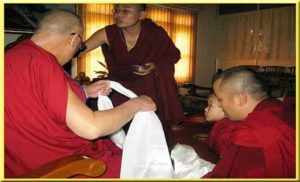 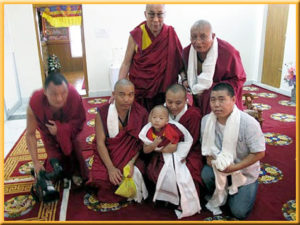 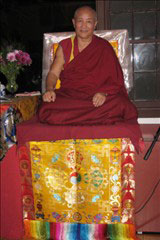 Venerable Emeritus Abbot Khensur Rinpoche Lobsang Jampa (known as Geshe Trinley Topgye) was born in 1937 in Nyaktren, a sector of Lhasa, the capital of Tibet. In 1947 at the age of 10, he gained admission to Sera Mey Monastery of the Sera Mahayana Monastic University near Lhasa – one of the three major seats of highest Buddhist studies.

Rinpoche soon returned to his studies in the exiled Sera monastery, reconstructed under the guidance of His Holiness the Dalai Lama, the spiritual and political head of the Tibetan people. From 1959-70, he resided with more than 1500 monks from four Tibetan Buddhist sects at Buxar, an old British Army camp in West Bengal. In 1970, the monks of Sera Mey relocated to Mysore district in Karnataka State in southern India.

The monks reestablished Sera Mey Monastic University in Bylakuppe. Khensur Rinpoche continued his spiritual training and studies there with his characteristic dedication and enthusiasm. In 1986, he completed the final exam for a Geshe degree, and received the esteemed honor of Geshe Lharampa (equivalent to a PhD), the highest level awarded.

From 1980 to the present, Khensur Rinpoche has continued to teach at Sera Mey Monastic University. In 1989, he assumed the position of Discipline Master for one year. Then in 1990, he received the advanced degree of Ngagrampa (highest degree in Buddhist Tantra studies) from Gyumed Tantric College after extensively studying the secret teachings of the Mahayana tradition. 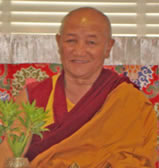 On completion of his term, Khensur Rinpoche returned to his teaching position at Sera Mey Monastic University, and continues to teach sutra and tantra to students and senior Geshes. He also continues his active leadership and participation in all religious ceremonies of the monastery.

During his term as Abbot of Gyumed, Khensur Rinpoche made his first visit to the USA and Canada to conduct various religious teachings and rituals at the request of the Gyumed College administrators and western students. A considerable number of Westerners benefited from this initial tour. In 2003, he taught widely in Singapore and Malaysia. GKR

Khensur Rinpoche is both a scholar of great knowledge and understanding, and a holder of many traditional teaching lineages. His generous presence and contributions to the Sera Mey Monastic University have proven indispensable. A living example of Buddha’s

teachings, he divides his time between personal meditation and practices, and teaching a growing network of Western and Tibetan students. He is highly qualified to teach on all levels of Buddhist practice and to conduct all Buddhist rituals. He currently lives and teaches at Do Ngak Kunphen Ling in Redding, Connecticut.

Wilson Hurley, serves as MSTC-WDC’s lay teacher, when Gyumed Khensur Rinpoche is not teaching at MSTC. He began his studies of Tibetan Buddhism with Lama Thubetn Yeshe in 1978 and then with Sermey Khensur Rinpoche in 1979 and was instructed to begin teaching by Sermey Khensur Rinpoche in the early 1990’s. He has received Buddhist teachings from many Buddhist scholars, including His Holiness the Dalai Lama. Wilson also serves the community as a therapist and has given meditation instructions, workshops and talks to community and church groups, including the Washington School of Psychiatry and a local public school system. 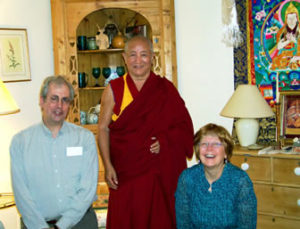